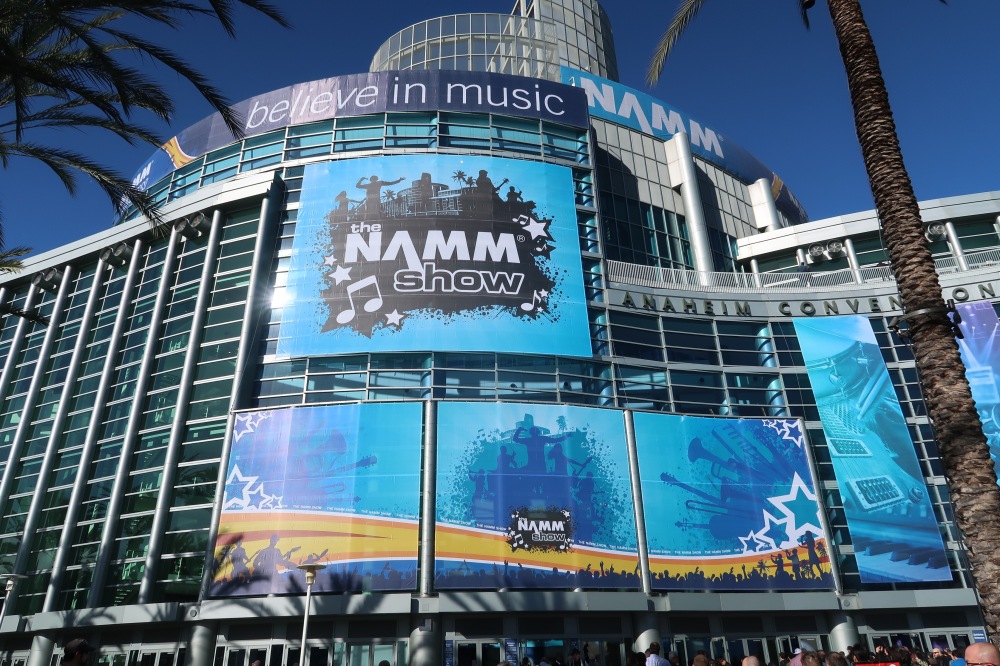 Each year dealers, buyers, distributors and musicians congregate at the Anaheim Convention Center and take over to check out and listen to all things music. NAMM stands for National Association of Music Merchants and is a trade-only event. How do I get in you ask?  Well it’s the age-old cliché:”I know a guy, who knows a guy” and I will leave it at that. The most expensive thing I buy is food, because you can’t technically buy stuff.

Covering the floor space of the Anaheim Convention Center are rows and rows, booths and rooms of the newest and coolest guitars, drums, amplifiers, woodwind and brass instruments as well as smoke machines, lights and even a tape gun to tape down electrical cords for all to ogle over. The Arena area of the convention center houses smoke machines, lights, rigging and stage items, but this year there were a couple of awesome things that I thought I would share.

Omnisistem Lighting displayed these mechanical globe lights operated by a motor which raised the lit balls up and down and changed to various colors. These would be cool to hang outside for a party, but since they are only water-resistant having to take them down would be a pain.
Fireworks inside venues have caused heartburn to venue management forever, but bands think it is cool to light things on stage on fire. Sparkular has created indoor fireworks with no fire. Sounds weird right? But it is so cool! 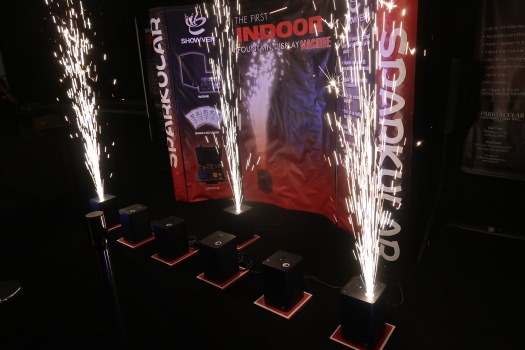 It is a box with granulated alloy that “lights” and shoots out fountain like fireworks. You can touch it and no burns or marks. It is quite expensive but if you are a huge touring band, money for awesome fireworks on your stage is a no brainer. I don’t endorse or receive anything from these companies, but just wanted to share these couple of super cool things and where they came from.

Amongst all this “other stuff” is of course instruments. Guitars and basses in all shapes and forms some of which would probably only look good for a photo shoot or hanging on a wall decorate the booths of each company. Amplifiers from various companies are also on display in all sorts of sizes and colors. Drums and all things that go crash in the night are placed in the far corner of the huge floor. As you walk closer to that area you won’t be able to hear much else, which makes no sense to me that’s where the lounge area is. I could not forget about the many displays of good ol’ woodwind and brass instruments and all of the other instruments you would see in a parade or an orchestra. A wide variety of instrument gawking is represented for all to enjoy.

One of the exciting aspects about attending NAMM is getting to see and often hear famous musicians play or sing right in front of your eyes. Each year a list is published of scheduled performances and signings of various artists daily along with award shows and various seminars. This year truly bummed me out because I did unfortunately miss the opening event of Richie Sambora (one of my favorites) and Orianthi in the open air area of the Convention Center. Stevie Wonder is one of the musicians who attends each year, each day and sits down to entertain the visitors at random. I have not heard him play, but last year I was able to see him up close in between the four deep bodyguards surrounding him. I was able to get a small listen to Gilby Clarke formerly of Guns & Roses performing in a very quaint area of the KORG booth. There were only about 30 people in the room rocking out with him which is a fan’s dream. When the set was complete, listeners were able to chat with him and the band members as well as take photos. It is great to see these rockers still playing and entertaining the ears of the fans.

While standing with my friend as she was getting ready to shoot pictures of DJ Ashba guitarist of SIXX A.M., Charlie Benante drummer of Anthrax, David Ellefson bassist of Megadeth, Mike Inez bassist of Alice in Chains and to my huge surprise… Lita Ford. She was not listed on the appearance list we had seen earlier in the day, so I was super stoked! After standing and shooting some pictures myself, I was smacked upside the head with the thought to get in line and meet her! I was a little starstruck I guess and I am using that for my story and I am sticking to it.

After standing in line for about 40 minutes, my Bucket List received a check mark when I was able to meet Lita Ford. I congratulated her on the She Award she had received the  previous evening. I shared with her that I was able to see her play at one of the final shows at Irvine Meadows earlier in the year. Lita said it was so much fun and was glad she performed. Now here is the really girly part… As she was signing my photo, I looked at her nail polish that was a lighter color of the silver metal looking polish I had on. I just joked with her and said “Our polishes match.” Lita replied with, “Oh wow they do. They look like shiny metal. I really like yours.” She then proceeded to tell me a fan turned her onto the color she had on and she got it at Walgreens after a show one night. Oh my!

Lita Ford and Me!

Lita posed for a couple of pictures with me and the moment was over. I walked away from that moment flying high and joking that Lita Ford and I had a girly conversation about nail polish. What an awesome experience!

NAMM has more than just instruments, it showcases all things music such as guitar straps, picks, cases and ear monitors. A few years back I won a pair of custom UE (Ultimate Ears) monitors. These are like ear buds for music, but these are the type the musicians wear at concerts while performing. I never thought in a million years that these would suit my purpose of normal music listening, but man was I wrong. I use them when I fly and when I want to totally block out the world and just rock out. While on my way home from Texas on this Friday of the NAMM show, I noticed a crackle in my ears. I figured I would have to send them back for repair, but with UE at the NAMM show I thought I would ask about the repair policy. I spoke with a UE designer who hooked me up with right person and poof my ears were turned in for repair and at no charge! I will make sure I tell even more people about UE and the great service as well as product they have. What an excellent way to take care of your customers UE.

View of the Anaheim Convention Center Courtyard from the 3rd floor

Even though we have attended NAMM each year and it is usually the same overall, this year was a little extra special… great customer service and check marking an item on my bucket list. Can’t wait to see what new adventures we will have at NAMM 2018. Until then… Rock on!